Alan Averill Nemtheanga is the busy bee, already proving his chameleonic vocal skills in Twilight of the Gods, Blood Revolt, Void of Silence and…Primordial. His latest child is Dread Sovereign, a very interesting ritualistic doom entity, where Alan also writes the music and plays the bass.

As Alan tells, DS is not just a project, but so much more. Pour a dram of Irish whiskey, or just – as one of their song title says – “drink the wine” and read this chat I had with this stayer.

How your life is right now and what Dread Sovereign is doing?

We just did a small European tour over the New Year and now a few shows during the summer here and there but mainly we are talking about a new 12”.

How do you see our world now and the actual political and social turmoil? Do you think that empires will fall?

Ouffff! You mean I have to answer questions like this regardless of if it’s for Primordial or not…? It’s very hard not to see the world in darker and darker terms isn't it? We are definitely descending into a very chaotic and violent period of history.

I don’t know, I guess I grew up in a household where the news was on the radio and not pop music. I read grown up books when I was quite young and encouraged to be aware of politics. So when we began with the band I knew I would write about subject matters like this. 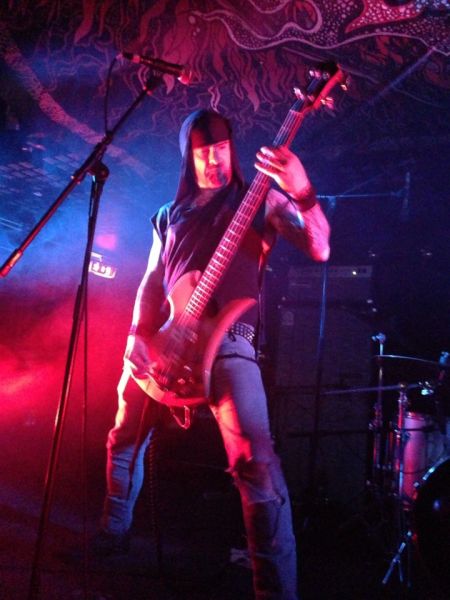 So did we lose forever the chance to read your lyrics about sex, drugs, parties and all that...? Is there ever going to be a sleazy rock'n'roll Nemtheanga band?

Hmmmm there are indeed references to all of those things in the lyrics through all of my bands but nothing overt, they are there if you look for them. However a rock n roll band could be fun alright, everything I have done tends to be quite heavy and dark, even Twilight of the Gods is quite serious.

Why doom and why now? Is DREAD SOVEREIGN just a new Nemtheanga project, or a full-time orchestra? It’s a one-album-band or there is more to come?

I think we will make another 12” and songs here and there, maybe not a 70+ minute long album again but sure we will continue. Why not, you know?

Tell me about the creation of the album!

I've had most of the riffs going around in my head for ages and finally we got a strong line up and it just moved from there. I've always had a really strong view on the aesthetic, sound and the way I wanted the whole thing to sound as one experience. Whereas in Primordial there are more than one strong view, in Dread Sovereign I guess I have the final say on the things like the mix, so this is the sound that was in my head.

Well the main influence is Cirith Ungol and then add in some Venom and the bands you mentioned among other things, Hellhammer etc. It might be easier to hear if we weren't tuned down to C but those are the influences, then I add my own spin on things.

Sometimes there are no direct metal riffs, and the music is more like a boiling chaotic mass. How much was this predetermined and how much of the actual writing was instinctive?

I have the main structures in my head, we write the songs and I plan it all out, but we recorded most of it live in the same room, we jammed parts, left all the mistakes, noise filtering into different mics, noise between the songs. Everything is left in there. We mastered it 5 times to try and keep the bass end rumble in there and all the feedback present. For the guitars I more or less left Bones do what he wants to, solos, feedback whatever….he adds to the chaos and noise. I have a very very strong view on keeping it organic and live, too much modern metal is too precise and computerized, Dread Sovereign is deliberately live!

The debut sounds more atmospheric than I expected! A bit of Hellhammer meets Fields of the Nephilim.

Yeah i love both bands, perhaps there is some of that in there also….. 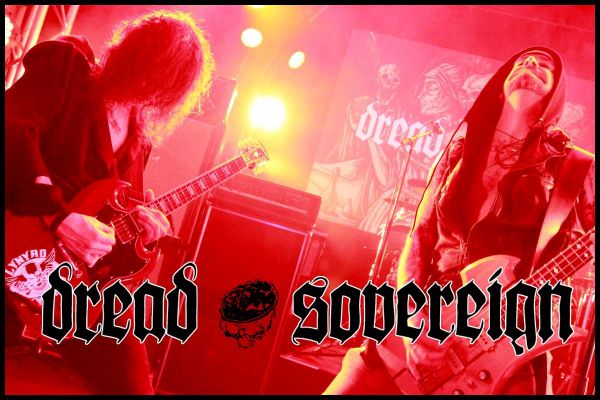 Some of the drums have this tribal touch, like a sort of a weird shamanistic ritual… It seems like you dig up more ancient feelings, something even before Celtic / Irish.

Possibly….I don't know… I also let SOL on the drums do what he wanted, I encouraged him to add as much 70s flair and rolls as he wanted to, obviously I had tempos and styles in mind and pushed things into that area but then just let him do what he wanted. Of course if it sounds ritualistic this is positive, it shows we are doing something right!

“Drink the Wine” is deep ambient. I don't know you the one who is into ambient music.

Yeah i always have been into electronic and ambient music, soundtracks etc. But these are made by my cousin, I gave him free reign to do something dark and interesting as intros and behind some of the music. He added an extra incredible dimension to things……

My vision of this album is that I am drilling deep into the core of the Earth. Was there any intent to sail to the abyss? There are several Lovecraft stories dealing with those subjects…

Of course I wanted to have this suffocating black atmosphere, i mean I am influenced by things like Angel Witch and Pagan Altar but I of course wanted it to be darker, filthier and nastier at the heart of the band. A chaotic recklessness. “Chthulu opiate haze” is indeed about Lovecraft and drugs.

“All Hell’s Martyrs” sounds like you are sympathizing with all the forward-looking people of the past who Religion or History sent to death. Do you feel like a modern heretic, or a “Cathar” of these days?

Sometimes I do yes, well to be honest I wanted a different angle for the lyrics than in Primordial but I can’t write fantasy, etc. So I wanted to write historical blasphemy if this makes sense. To have real events within the traditional structure of old school metal.

Do you write your music on bass, or on guitar?

I wrote most of it on the guitar but often in rehearsal some moments come out on the bass or Bones adds something. No rules really. I’m a lousy guitar player so it’s up to him to make them interesting.

What kind of gear do you use?

I have a ’79 BC Rich Mockingbird, early 80s orange head and amp cab, pedals it varies, i drive the head really hard for most of the distortion then maybe add something with at the moment an mxr. But I'm looking at an old rat pedal. I want this motorhead’79 tone but also with some more filthy bass end……the BC Rich kills it all though!!! Bones uses whatever isn't broken :)

Yeah great! They are awesome. A label based on honour and friendship! I like too many to mention. We are more than happy there. Dread Sovereign wouldn't fit anywhere else!!!

What were the best doom metal (or just metal) albums of the past years for you?

Tell me what comes to your mind when reading these words:

Whiskey - where too many of my best stories start…..

Beherit - remember getting the promo 92 tape and it blowing my mind…..massive influence

Irish - much love and much hate…..

Last question is what are the plans for Dread Sovereign?